Irkutsk is a tourist city, so there are a lot of cafes and restaurants, especially in the center. A distinctive feature of Irkutsk is a huge number of poznye, canteens where pozy are offered as the main dish on the menu. To the ear of a non-Siberian, this sounds funny. Pozy are a budget segment of Irkutsk’s culinary heritage.

Pozy (or buuzy in Buryat) are, roughly speaking, large dumplings similar in shape to Georgian khinkali. There should be a small round hole at the top of the poza. The filling is meat, always with broth. The pozy are of course steam-cooked. Cooking time for pozy is about 15-30 minutes, so you need to be patient.

During the excavation of the settlements of the Huns, large clay pots were found and adapted for cooking steamed dishes. One of the versions is that in Buryatia pozy have been eaten since the era of the Asian Huns, that is, since the second century BC. Pozy (buuzy) resemble a Buryat yurt. Same round shape, same hole in the roof. There is even a certain ritual of eating them. First, you need to bite off the buuza at the bottom and “open the door”, breathe in the warmth of the “hearth” (the heat of the internal steam), and then, after drinking the hot internal broth, eat the rest.

Pozy are very tasty, satisfying, inexpensive and in all establishments, they are of approximately the same size and recipe. For the average person, three pozy are enough. If you want, you can have more, but without pleasure.

How to eat pozy correctly? There is a broth inside the pozy (some call it juice), that you can and should drink. It is delicious but very hot. Pozy are eaten with hands. This is not only a tradition, but also convenient and rational. The first step is to take the lower part of the poza with the index and middle fingers. If it is too hot, it is better to put it off for later or try another one, since you will have to hold it for fifteen seconds without interruption. We tilt the poza slightly away from ourselves, like a bowl of soup, and bite off a small piece of dough at the near bottom edge to get a hole for the broth. Without lowering the poza on the plate, we drink all of the broth. But be careful, the broth is very hot. Then the poza can be put on a plate and eaten like a pie. Of course, the waiter will serve a fork with a knife so that the visitor can decide for themselves how it is more convenient for them to eat pozy. Decide for yourself: do not drink the the broth, or use cutlery after drinking the broth, but then you will not experience the true taste of the pozy. 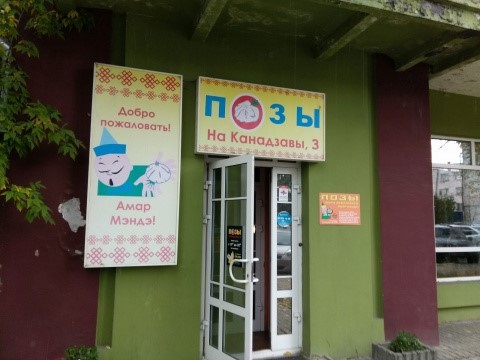 Cozy place, relaxed atmosphere, suitable for children. Very tasty and inexpensive. It is located in the center near the Kirov square on Sukhe-Bator street.

Pozy chain throughout Irkutsk. The most visited are two branches: on Krasnogo Vosstaniya street 9A (next to the 130th quarter) and on Partizanskaya street 102 (not far from the Barguzin cinema). At Partizanskaya there is a small cafe with several tables and disposable dishes. The assortment includes the main dishes, the prices are the same, the pozy taste no worse than in the central branch. On Krasny Vosstaniya – a full-fledged cafe, many tables, waiters service. Pozy bring about quickly enough.

In the cafe, the highlight of the menu a set of buuzy “mix” stuffed with turkey, with black dough, with hot spices. There are 6 options in total. Mix includes one of each.

A small cozy cafe on one of the city’s central streets. Nice interior design. The establishment positions itself as a cafe of Siberian cuisine. The menu is small and fits entirely on the wall behind the checkout counter: soups, dumplings, noodles, pozy (here they are called exclusively in Buryat, i.e. buuzy), several salads and desserts, drinks.

Church of Our Lady of Kazan