Remember, brother, that for the Cossacks:

• Friendship is a custom;
• Partnership is a tradition;
• Hospitality is the law.

A Cossack cannot consider himself a Cossack if he does not know and does not follow the traditions and customs of Cossacks. Formulating them briefly, you get a kind of unwritten Cossack home law:

1. Respect for elders.
2. Immeasurable veneration of the guest.
3. Respect for a woman (mother, sister, wife).

Respect for the elder is one of the main customs of the Cossacks. Paying tribute to the years that they have gone through, the hardships of the Cossack’s fate, the impending weakness and inability to stand up for themselves, the Cossacks always remembered the words of the Holy Scripture: “In the face of a gray-haired man, get up, honor the face of the old man and be afraid of your God – I am the Lord, your God.” The custom of respect and reverence for an older person obliged the younger one, first of all, to show care, moderateness and readiness to render assistance and also demanded compliance with the etiquette (when the old man appeared, everyone had to stand up – the Cossacks should put their hands on the headgear in uniform and take off their uniforms cap and bow).

Cossacks and guests
Immense respect for the guest was determined by the fact that the guest was considered the messenger of God. The most expensive and welcome guest was considered a stranger from distant places, in need of shelter, rest and guardianship. In the humorous Cossack feast song-ditty “Ala Verda”, the reverence of the guest is most accurately expressed: “Each guest is given to us by God, no matter from where he is, even if he is in wretched rags– ala-verda, ala-verda”. Despised was the one who did not show respect to the guest. Regardless of the age of the guest, he was given the best place for a meal and rest. It was considered indecent for 3 days to ask the guest where he was from and what the purpose of his arrival was. Even the old man gave way, although the guest was younger than him.

Birth of a cossack

Cossacks appreciated family life and were very respectful of married people, and only constant military campaigns forced them to be single. Single cossacks in their midst did not tolerate libertines, they were punished with death. Single Cossacks (who had taken the vow of celibacy) nursed the born baby, and when he had his first tooth, everyone certainly came to watch it, and there was no end to the enthusiasm of the battle-tested warriors.

A Cossack was born a warrior, and with the birth of a baby its military school began. All the relatives and friends of the father brought rifles, cartridges, gunpowder, bullets, a bow and arrows as a gift to the newborn. These gifts were hung on the wall where the parent was lying with the baby. Forty days after the mother, taking the cleansing prayer, returned home, the father put a sword belt from the saber on the child, holding the saber in his hand, put it on the horse and then returned the son to the mother, congratulating her on the Cossack. When the newborn’s teeth were cutting, his father and mother put him on a horse again and brought him to the church to serve a prayer to John, the warrior. The first words of the baby were “hup” and “bang” – to urg the horse and shoot. Military games in the country and target shooting were the favorite pastimes of youth in their free time. These exercises developed accuracy in shooting, many of the Cossacks could knock out a coin sandwiched between fingers at a considerable distance. Three-year-old children were already riding horses freely in the yard, and at 5 years old they rode across the steppe. 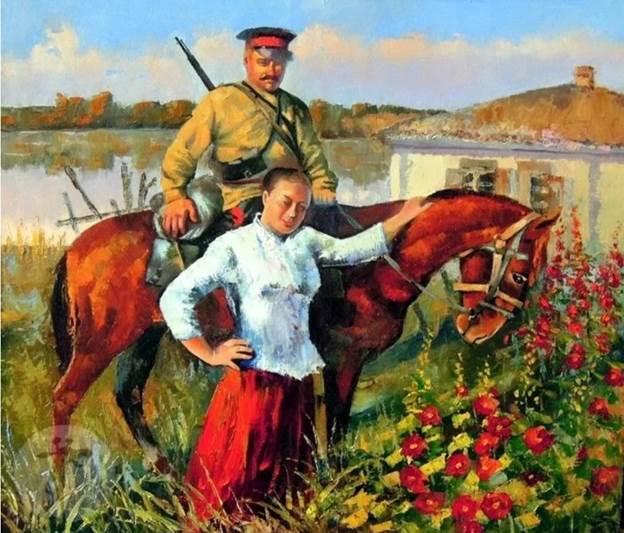 History of the Don Cossacks