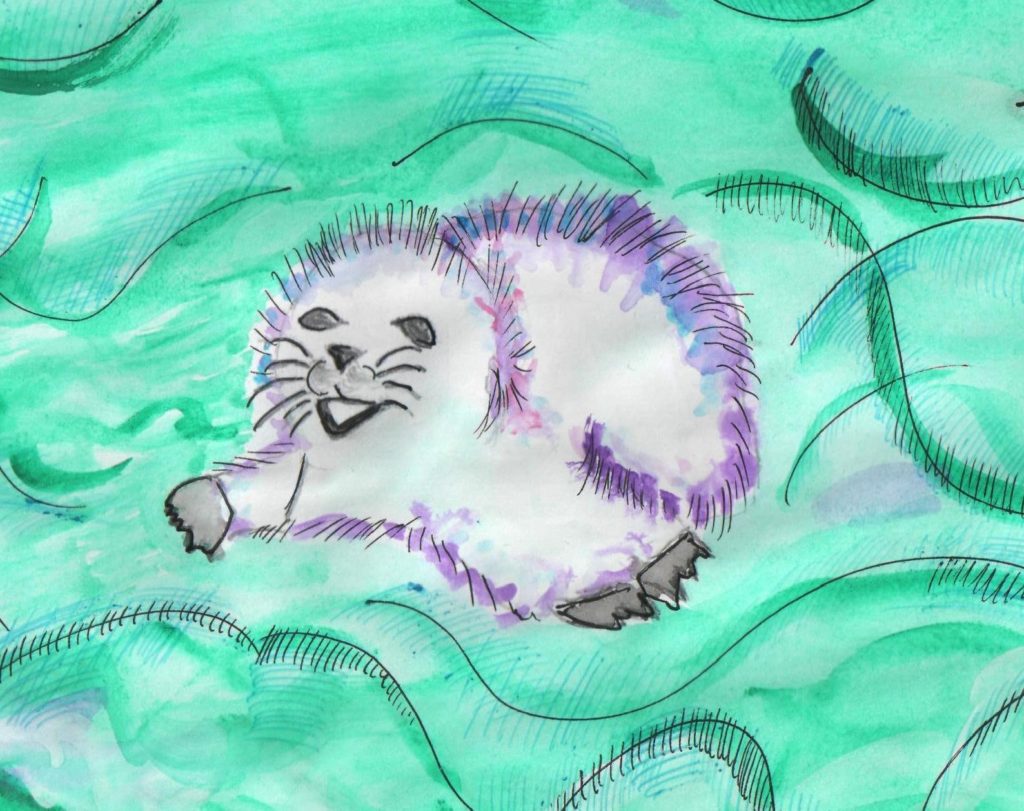 Once upon a time the Baikal seal Zvezdochka (Starlet) received an e-mail. It spoke of the great gathering of all the seals of the world in the Kara Sea for the New Year celebrations. “Oh, how I want to see my relatives,” Zvezdochka’s biggest wish was. “If I finish the year with only A’s at the lake school, then Grandpa Baikal will definitely let me go to the seal holiday,” she thought. But, apparently, the seal did not know her grandfather well, she forgot how hard it was for his daughter Angara when she decided to run away from Lake Baikal to her fiancé Yenisei. Grandfather did not let Zvezdochka go to the holiday, and even got angry. He splashed in angry waves. He raised a fierce storm, even the mountains burst into tears, the sky turned black with fear. Only the wind howled, and the sea-hero raged. Lake Baikal summoned Sarma for help, the strongest of the winds – the giants of Lake Baikal. The grandfather himself is afraid and cannot resist Sarma, he is ready to fulfill her every whim. They agreed to interfere with Zvezdochka’s New Year’s journey. 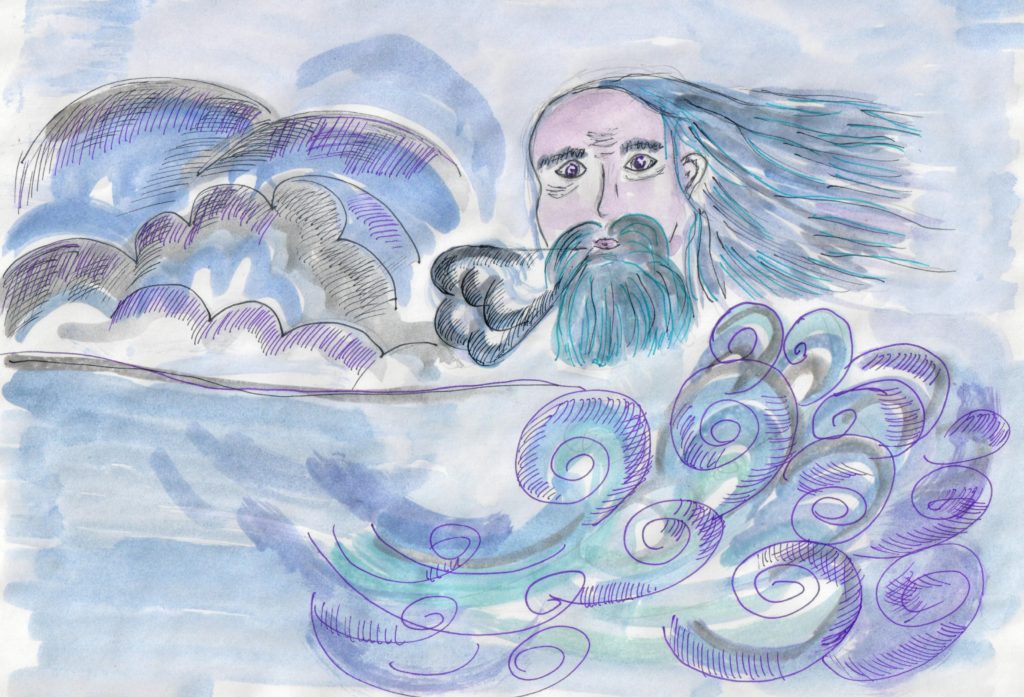 In the meantime, the seal turned to the wise Baikal sturgeon, the largest fish of the lake, for help.

“How do I get to the north to the Kara Sea?”

“It’s very far away,” the man of wisdom replied. – “The daughter of Baikal Angara will help you. She will take you to the Yenisei. And he will lead you to the Kara Sea in the north.”

Zvezdochka swam to the Angara.

“Dear Angara, help me get to the Yenisei.”

“I will help you, little one. But for this you have to find my favorite beads at the bottom of Lake Baikal, which I lost when running away to my beloved Yenisei, he will recognize the beads and help you.”

“I will try my best. I have golomyanka friends. They are called endemic to our lake. They are quick, nimble, and consist of fat. They scurry everywhere, you won’t see them in the water.”

The golomyankas quickly found the Angara beads and handed them over to the seal. But the cunning Baikal Omul was assigned by Sarma to spy on Zvezdochka. Sarma got angry and ordered the blizzards to howl. In an instant, the mountains, villages, longboats, burning lanterns along the shores of the sacred Baikal disappeared. All the snow flew into the air, everything merged in a wild snow dance. Sarma huffed and puffes and quieted down. It ended, as it began- suddenly. Zvezdochka crawled ashore. “How do I get to the north? If I swim, I won’t make it on time,” she thought. And just when she thought of it, Zvezdochka heard a cry for help behind the windbreak. The seal was expecting to see a handsome ermine near the spruce fallen by the shore, but there, in the branches, a huge white horse got entangled by its mane. It neighed for help. “You are so beautiful; I will help you!” – whispered Zvezdochka. The freed horse thanked its savior and, striking with its hooves the ringing ice sparks, galloped straight across the sky. The tail of the beautiful animal was whirling in a blizzard. “Oh, dear seal! Thank you for your sensitive heart! I am your loyal friend from now on and forever. Wherever I am, I will come to your aid at your first call! My name is Whirlwind.” 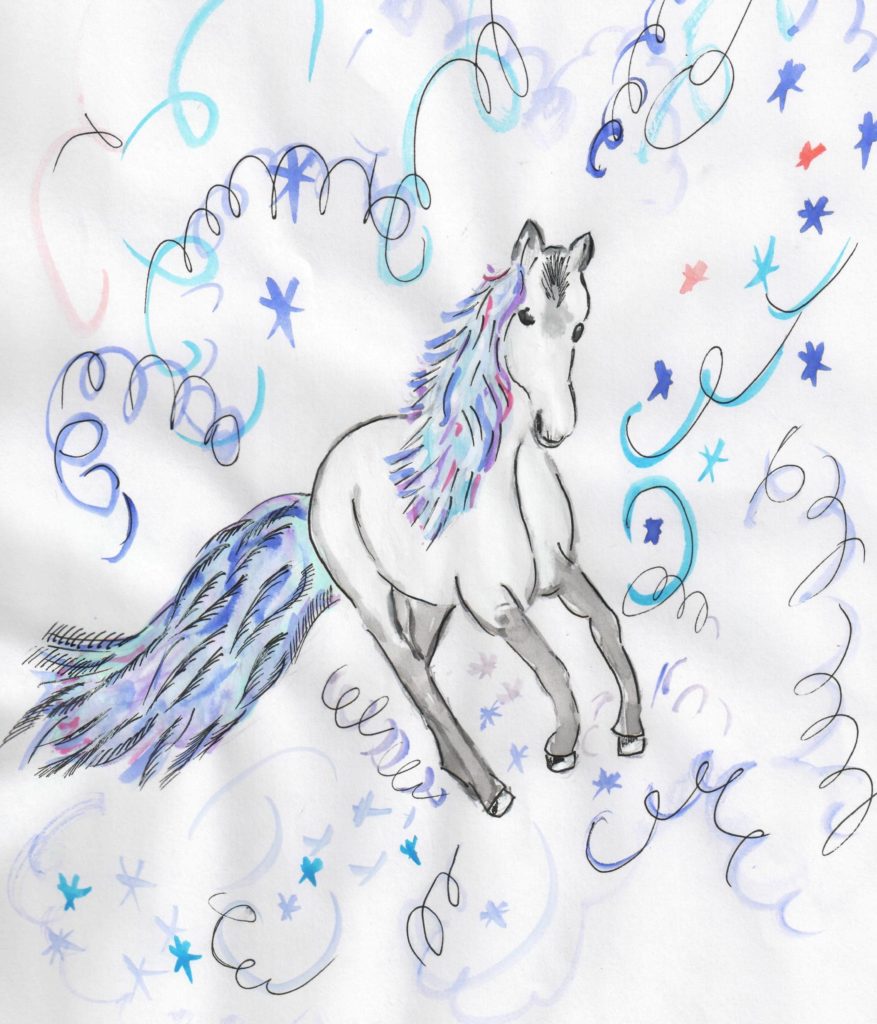 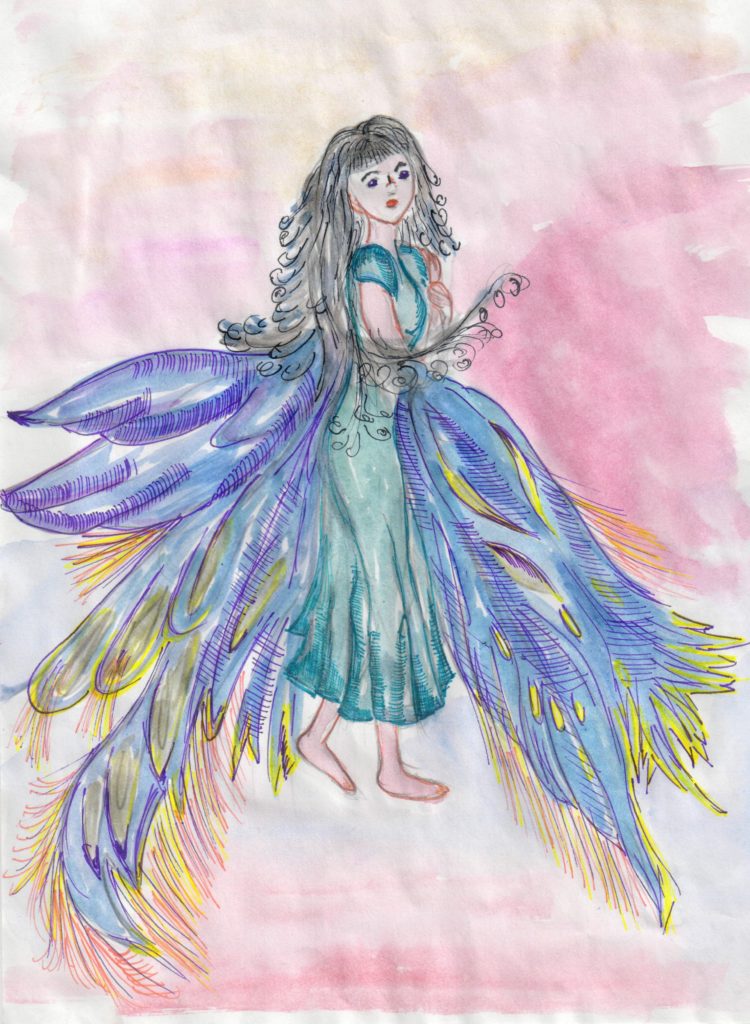 Meanwhile, Whirlwind and Zvezdochka rushed towards the Angara. The insidious Sarma ordered the white-headed Eagle to stop them. And he already almost caught up with them, because there is no one faster in Podlemorie, angrier and smarter than him. Meanwhile, friends were already flying over the Angara. Father Baikal also forbade helping his daughter’s friends. But Angara was not afraid of the giant’s revenge. For the fact that Zvezdochka found her beads, the river gave them a magic pillow. If you tear the pillow, then snow begins to fall out of it. Baikal was terribly angry at the Angara and ordered to chain his willful daughter in heavy ice until spring.

The seal tore up Angara’s gift, and snow fell to the ground. It fell not only from top to bottom, but also from bottom to top, and from left to right, and from right to left. Everything turned whiter-than-white. Eagle could not pursue the seal further; his wings froze and he turned back to Baikal. Whirlwind and Zvezdochka rushed forward towards the cherished goal.

In the meantime, mighty Yenisei was lulled with fairy tales by the Vodyanoy. The giant fell asleep, you couldn’t shout for it, couldn’t get through to it. Quiet surface of the giant … only quiet waves rustle regularly against the pebbles. Friends went down to the water itself. Zvezdochka burst into tears of despair. Even Whirlwind was depressed. Suddenly, the bells started ringing from the forest. The horse neighed with joy; he recognized the Father Christmas.

“Hello Father Christmas! We are glad to see you. Please help us wake up the Yenisei, the seal may be late for the seal gathering.”

“Of course, I will help, but there’s a problem! I myself need help. My Snow Maiden is late. And without her, all the toys for the children were mixed up. Sonia gets a plane, Vanya – a doll … I can’t understand anything!”

Friends began to work together. A fabulous flashlight with the name of the child was hung on each toy and wishes were written for each of them. In gratitude, Father Christmas revealed the secret of the Vodyanoy: only the beads of the beautiful beloved Angara can wake up the Yenisei. Zvezdochka put the beads on her neck and dived under the water. The beads rang, played, sparkled under the winter sun. Yenisey got up, straightened his mighty shoulders, freed himself from his sleep spells and thundered waves on the rifts. He began to rumble when he saw his old northern friends. He gladly showed the way to the Kara Sea. Father Christmas did not want to part with Zvezdochka and Whirlwind, decided to go to the world gathering of seals, to wish everyone a Happy New Year personally. And the road together is always more fun! In the meantime, all the seals gathered together. There were so many species there: harp seals, striped and spotted seals, Caspian seals, sea hare and white-bellied seal. Everything was ready for the New Year celebration. The polar lights lit up. Shimmering in different colors, sparkling arcs lit up in the night sky. From time to time, long shimmering stripes appeared, then a giant cascade of light hit the Earth from space. 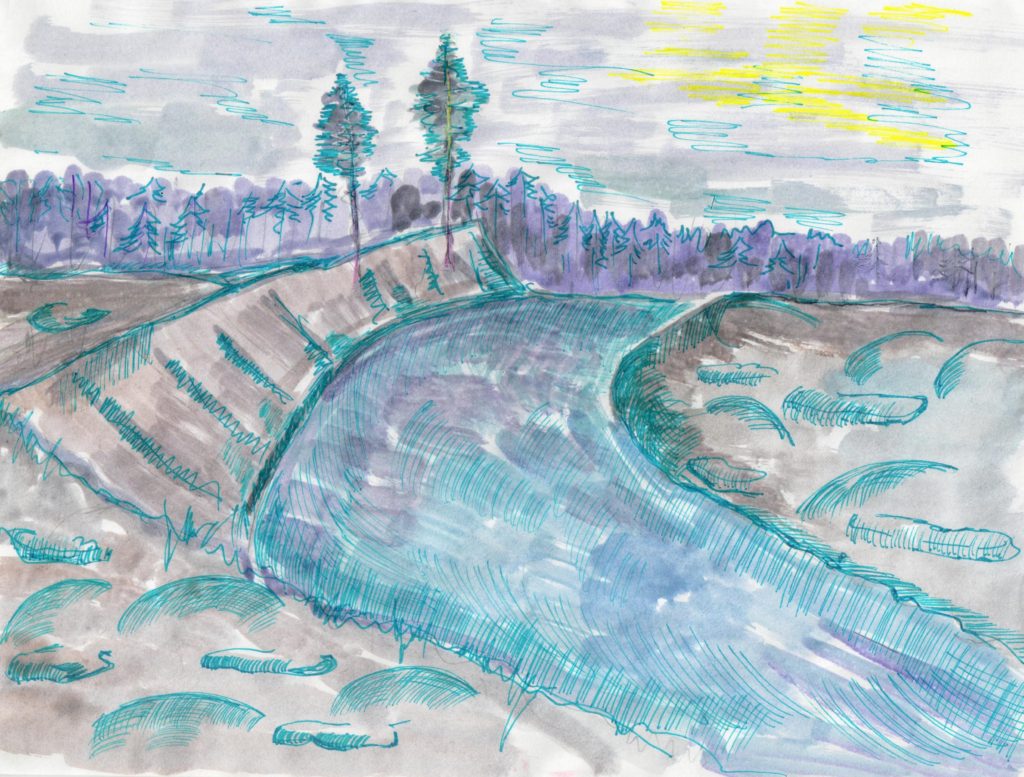 Suddenly, weaved out of a whirling blizzard, a white horse appeared in front of all those gathered. Its tail and mane were made up of thousands of tiny snowflakes. All the guests looked, as if spellbound, at the Zvezdochka, Whirlwind and Father Christmas descending from the sky. This is where the true celebration began, a real New Year’s fun! After all, there is nothing better in the world than to celebrate the holidays with family and friends! As a keepsake, Father Christmas presented everyone with New Year’s photos and delicious fish. And the seal, returning home, on long Baikal nights told the inhabitants of the lake about her New Year’s adventure, wonderful friends and the beauty of our Blue Planet. Even the formidable Baikal, having replaced anger with mercy, listened to the stories of Zvezdochka. Maybe someday they will become new legends of the gray-haired Baikal. 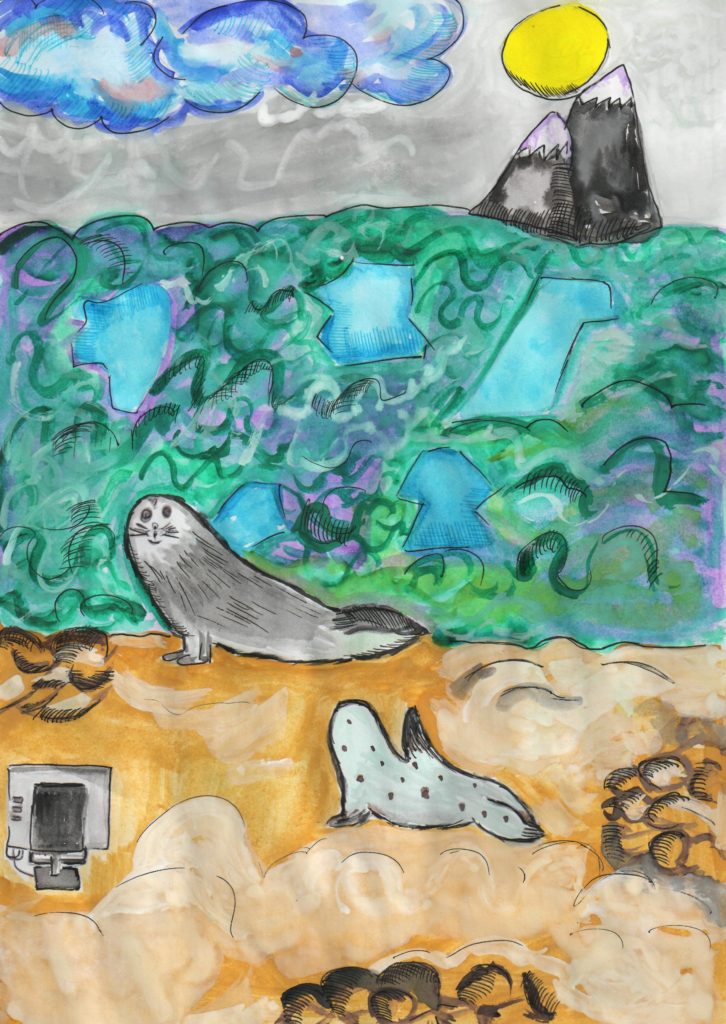